These two maps (mouse over to see the more modern one) show the area of Peterloo as it was and where it is today: 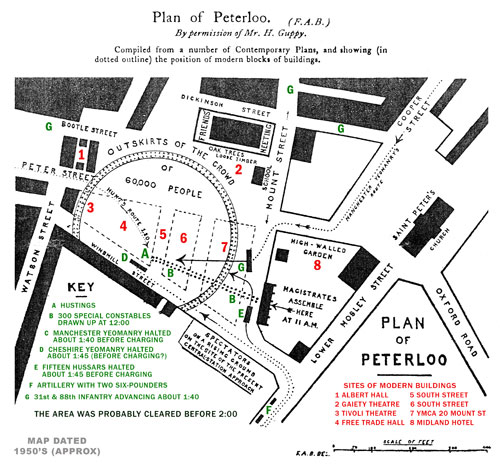 On the newer map you can see Central Library and St Peter's Square toward the top right, and G-Mex is bottom-left.

The Radisson hotel where the blue plaque is sited, is the building just above the 'A'; the plaque is at the front of the hotel on Peter Street, marked by a blue circle.


"The word "democracy" has been tarnished by the politicians who benefit from its Parliamentary form.

But do not forget that people fought and died for democracy, for the right of universal suffrage.

The Peterloo Massacre was one such event but the calls for freedom, justice and democracy were meet with murder and suppression.

The shameful object that seeks to serve as a commemorative plaque to this event hides the struggle of working people, it hides the urgency of their demands and the brutality of the state.