Museums and Libraries all over Greater Manchester commemorated the Peterloo Bicentenary with exhibitions of Peterloo collections.
Some of the exhibitions that took place were:
"Protest and Peterloo" exhibition at Touchstones, Rochdale
"Remembering Peterloo" at Quarry Bank and Dunham Massey
"From Waterloo to Peterloo" at Gallery Oldham
"Making the News: Reading between the lines, from Peterloo to Meskel Square" at the Portico Library, Manchester.

The main 2018 commemoration event on the 19th of August was organized in conjunction with Greater Manchester Trades Council, with the names of the dead being read by those individuals who, over the last decades, have been crucial to reviving the memory of this previously neglected part of our history.

New research by leading Peterloo historian Dr Robert Poole, this year uncovered several new names that have been added to our official List of Fatalities.

We also hosted a very popular audition for artist Red Saunder's forthcoming Peterloo Massacre photographic tableau, which will form part of his Hidden Series, a project which 'recreates great moments in the long struggle of working people for democracy and social justice.'

On the 16th August we were delighted to display some beautiful replica banners provided by the production company behind Mike Leigh's Peterloo film.

What a great day it was! After taking a side step in 2016 to create the Peterloo Tapestry, we returned to our traditional commemoration ceremony in 2017, only this time we asked you bring along placards bearing the surnames of people who we know were at Peterloo on the 16th August 1819.

We gathered in Albert Square and stood defiant as Magistrate Charles Ethelston (played by Christopher Eccleston) attempted to 'disperse' the crowd by reading the riot act from the window of the Lord Mayor's suite in the Town Hall. Our 'villain' was received with boos and laughter and told to "Sod off!"
We were also pleased that Maxine Peake was able to join us, having recently finished filming of Mike Leigh's film 'Peterloo' due to be released in Autumn 2018. She delivered a message of support from Mike Leigh (who couldn't be there) and presented us with a set of Peterloo badges identical to those gifted to the entire film crew and cast on the set of the Peterloo film for the commemoration they held on the 16th August 2017. The badges are now attached to The Peterloo Tapestry which also made an appearance on the 20th August.

The day ended on a high note when we received a suprise visit and beautiful impromptu performance by Hand in Hand LGBT Choir to end their 2017 Choir Festival.

For the full list of known attendees see our Peterloo Names page.

The Peterloo Memorial Campaign Group's 2016 commemorative event was the creation of a public participative artwork in the form of an evocative tapestry. Creation of the tapestry took place in the historic Friends' Meeting House, where victims took refuge from the massacre on the 16th August 1819.

As well as being a powerful, expressive, absorbing and intriguing object in its own right, the Tapestry serves as a formal record of Manchester's aspirations for what the forthcoming Peterloo Memorial should express.

The 4ft x 30ft canvas was spun and woven on vintage machines at Quarry Bank Mill, onto which members of the public were invited to attach their pre-prepared pieces. The finished artwork is a collage of ideas, inspiration, memories and poignant objects which reflect what the Peterloo Massacre,
and other struggles for democracy both past and present, mean to the people of Greater Manchester.

A very special thank you to the Friends' Meeting House Manchester for their warm welcome and overwhelming support, and to Quarry Bank Mill for donating the cloth and letting us explore their workshops and storerooms for materials and mementos used in the tapestry.

The tapestry was first revealed to the public during the Reading of the Names Ceremony on Tuesday 16th August 2016, on the Windmill Street side of the Manchester Central forecourt, before attendees helped to walk the 30ft banner through lunchtime traffic to Albert Square, where it was proudly displayed outside the Town Hall.

A subsequent session was held at Briton's Protection pub on 17th November 2016 where the public were invited to help us fill all the gaps on the tapestry with words to describe what we people feel the memorial should embody and express.

We plan to hold a final finish-off session to complete all the gaps and reinforce stitching before the 2017 anniversary in August. Stay tuned for more
updates or contact us if you have any questions about how to get involved.

Our biggest commemoration yet! 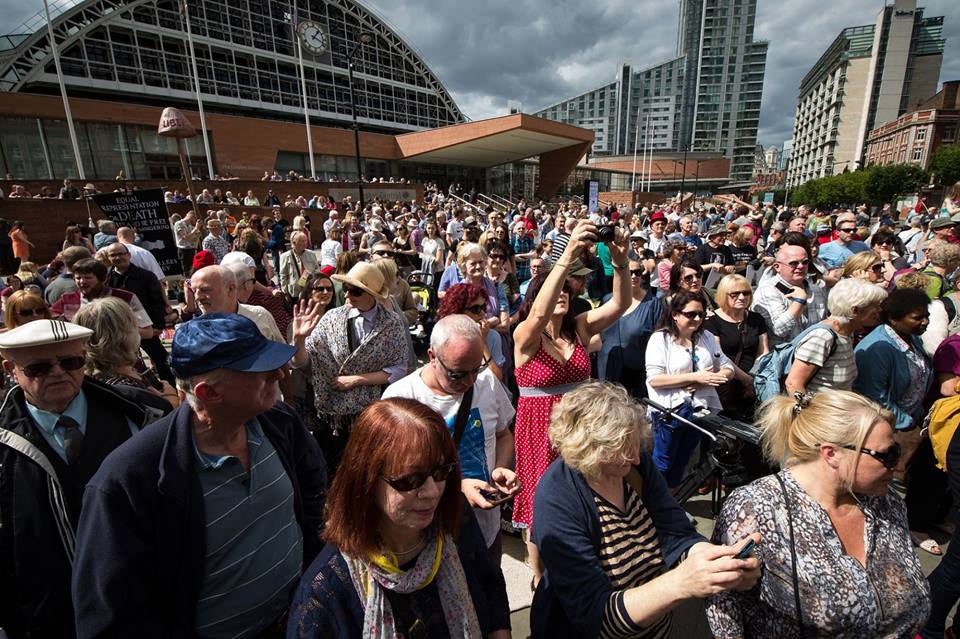 Despite the energy and buzz of the crowd a haunting minute's silence was observed during the Reading Of The Names ceremony.

Manchester Central Conference Centre were really co-operative and helpful, offering us use of the South half of the space for the commemoration, despite them having three events on that weekend.

Most of all, thanks to everyone who attended, helping to make this such a successful and memorable commemoration!

The 195th Anniversary saw a huge increase in numbers, with several high profile supporters joining us for a solemn 'Reading of the names of the dead', a ceremony we now plan to build on over the years.

Each of our guests, together with members of the campaign, read a name apiece, along with as much biographical detail as we could find. 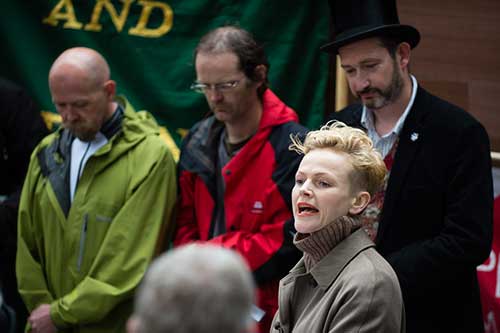 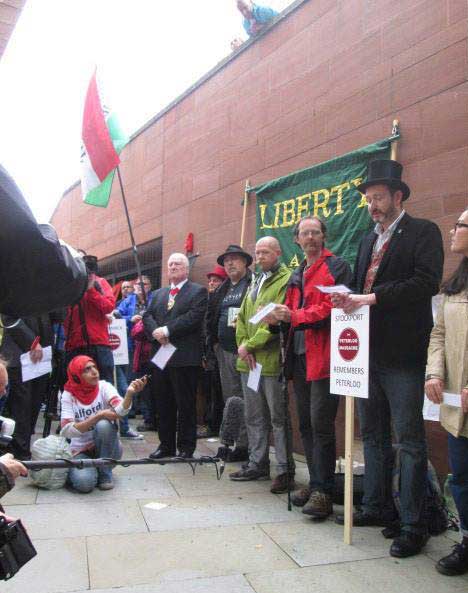 We were pleased to have actress Maxine Peake, fresh from her performance of Shelley's 'Masque of Anarchy' join us (along with the Lord Mayor) to read the names of the dead under the Peterloo plaque on the side of the former Free Trade Hall for the 16th August commemoration.

There was a record turnout, and this excellent, accurate piece from the M.E.N. was part of a pretty wide (but very varying in quality) media interest.

The event generated plenty of media coverage and saw good numbers attending. Council Leader Richard Leese commented to us that Peterloo was a 'minority interest', so let's hope they take notice.

Flowers were laid at the foot of the Liberty Cap. Common or garden ones are totally appropriate.

We launched our own Peterloo Memorial Designs on Facebook.

We want it to act as a resource for the decision making process, as a benchmark... for what can be done, as a democratic input into the process, and as inspiration for artists seeking to create the finished piece.

The commemoration event this year was a stunning success. Billed as the first time the liberty cap has been raised in Manchester for almost 200 years, the event attracted 200 people.

People marched in along the original routes from Oldham, Middleton and Stockport, carrying replica banners. 20 especially produced modern Liberty Caps were raised on sticks, with music provided by singers from Middleton, who later performed the debut of their 'Peterloo - soldiers on the rampage' at the Angel Pub in Manchester. The crowd then made their way to the peace gardens to lay a Peterloo wreath.

Speakers included Jim Battle, the deputy leader of the council, and Tony Lloyd MP. Peterloo Chairman Paul Fitzgerald emphasised how crucial it is that the design of the memorial be realistic and informative:
"This area has often been described as sacred ground and it's haunted, we think, by how poorly we've remembered these people. For almost 200 years the memory of Peterloo has been ignored, fudged or whitewashed, so it's crucial, if we want to put these ghosts to rest, that the new memorial changes all that.
The memorial needs to be prominent, realistic, informative and respectful- a design that actually informs people of what happened here, and not an abstract, meaningless block of stone, or once again, we'll have let them down.

Hundreds of people signed the campaign petition demanding that the proposed memorial is "prominent, realistic, informative and respectful".

Peterloo featured heavily in artist Jeremy Deller's piece 'Procession' as part of the Manchester International Festival, Sunday 5th July, Deansgate. The replica banners and other peterloo memorabilia then featured in the related exhibition at Cornerhouse.

There was plenty of press coverage, including all the local TV stations:
BBC News
Manchester Evening News
Oldham Chronicle


Exhibition at the Central Library

Terry Wyke and Stephen Yates have curated a superb collection of old and new Peterloo memorabilia, on display in the 1st floor exhibition cases. This runs until September 2009.

We pasted a dignified memorial onto the floor very near the location of the speaker's cart, laid flowers, and added to it the metallic horseshoe shapes as suggested at our design day; one for each person killed. This sadly didn't last more than a day, though was seen by the large crowd attending that day's superb public Peterloo history walk hosted by Jonathan Schofield.
We then moved on to the busier location of St Peter's Square, and handed out numerous flyers.
BBC local radio was there and we gave an interview. The Council arranged their own photo opportunity but didn't invite us along.

Thanks to everyone who came along and made it a success. There were some great ideas, a few of which are reproduced here.

This was the most popular idea of the day- creating the possibility of a monument that covers a very large area without being prohibitively expensive. The hoofprints could be used independently, or in conjunction with a central monument / plaque.
The hoofprints could follow the paths taken by the cavalry on the day and then collect in a violent looking melee once they reached the area covered by the crowd. The names of those who died could be marked over a wide area by smaller plaques, each of which is visited by the hoofprints.

Other variations on this 'floor' sculpture included:

People felt very strongly that monument should provide a clear description of the event, and that some form of plaque should be used to achieve this.

Emerged again and again in the designs, as these were a major part of the banners on the day, and very carefully targeted by the Yeomanry. Read an explanation of this very old and powerful symbol of democracy and freedom

Late in 2007 the Council committed to erecting a statue to Peterloo, and soon after we met with Virginia Tandy, Director of Manchester City Galleries.
They have brought in some specialist consultants to start the ball rolling. We hope to be involved in the decision making. Our bottom line is that the statue follows our set of minimum criteria.

"...And this isn't the end of the matter. The young people from Salford and the Peterloo Memorial Campaign have rightly pointed out that such a significant event in British history ought to have a significant monument to commemorate it. That's something I hope we can do by this time next year."

The Leader of the Council, Lord Mayor, schoolchildren from Salford, assorted media and about a dozen of us from the Campaign group were in attandance as the new plaque was unveiled.
Pictured with the Lord Mayor is Sheila, one of the Group and a direct descendant of one of the Peterloo protestors.

On 16th August 2007 we braved the Manchester rain and with the press and tv crews in attendance taped our proposed new red plaque over the existing one (see both plaques here) and laid flowers beneath.

At the end of the protest we nailed a large waterproof version of the new plaque onto the pavement in St Peter's Square and left flowers next to it.


We only expected this plaque to be temporary - but others added flowers to it (including a beautiful white wreath from the Central Manchester Labour Party) and it lasted until the bank holiday weekend.
While removing the old dry flowers and cleaning it up the other day, we noticed an amazing number of people stopping to read it! We think this is because of the 'someone-died-here flower effect.. 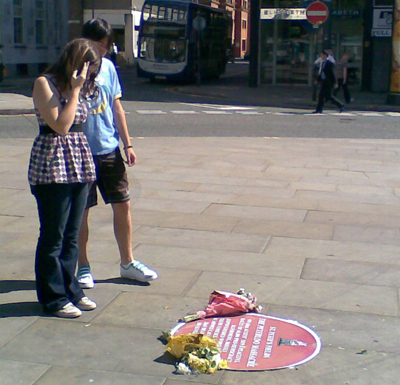